Whale researcher Dr Heike Vester from Ocean Sounds supports PETAs request to stop all ticket sales to SeaWorld and Loro Parque to TUI. We send a letter to German TUI with the voice of free living Orcas with the request, so far we have not received an answer…

in 2012 Heike visited Loro Parque on Tenerife together with the BBC to see a newly captured Orca from the Norwegian population, she was named Morgan.
The visit was part of the BBC documentary: Killer whales – beneath the surface.
It was shocking and devastating to see orcas and dolphins in captivity, and the whole show that was used to make money from captive highly socially evolved animals that swim at least 100km a day in the wild, was sickening.
Heike had recordings from Morgans related family group and was not allowed to play it to her, because the managers were afraid to cause too much stress to Morgan. At the same time they claimed that she was death and could not be released into the wild. Morgan was soon impregnated and had a calf, even though she was just a bit older than a calf herself. She was used for the industry’s captive breeding program!

This track is from Group P, which shares a lot of calls with Morgan the captive Orca. The Free Morgan Foundation made a small video, including this sound track. We oppose captivity for dolphins! I am Morgan 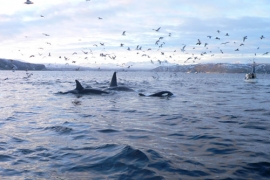 Killer whales (Orcinus orca) feed on herring using a method called carousel feeding: The whales herd the herring tightly together and chase it close to the surface, where they hit it with their tails to kill or stun it. Then they eat the herring one by one. You hear many clicks, which the whales use for echolocation to find the herring. Buzzes, calls and whistles are used for communication, and in addition you hear tail slaps that kill the herring.

press release of Peta in german