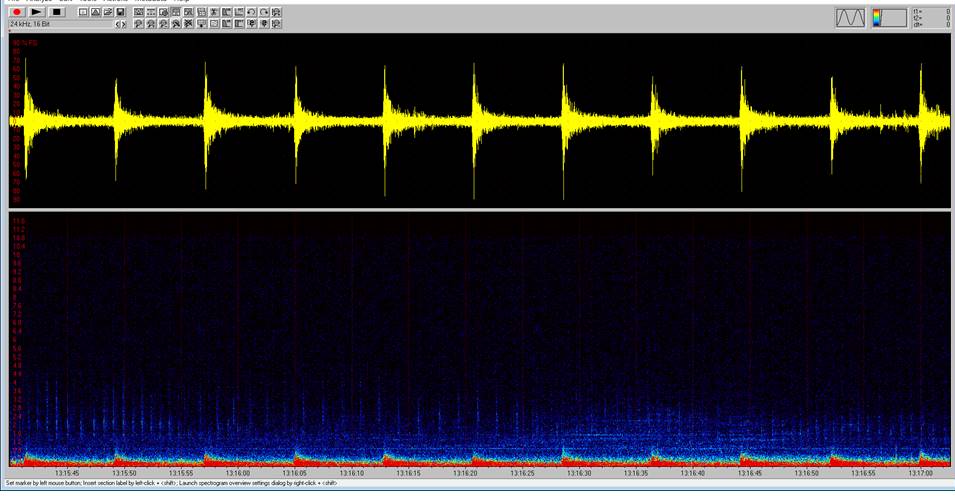 Every 8 seconds an explosion can be heard in the Vestfjord, ongoing day and night, it only stops during bad weather and when the seismic surveys have technical issues. These surveys are conducted ca 200-300km southwest from here in Traenabanken since end of April and will go on all summer until 31.10, you can follow the surveys here: www.npd.no

These sounds were heard every summer since 2010 and it seems that they increased in duration and strength since the beginning. Whales can hear those sounds and when they get too close they can be hurt. In the sound file you also hear 2 sperm whales clicking, note that the sperm whales were closer to the hydrophone than the seismic airguns (sperm whales have a source level of around 220dB and airguns around 260 dB!).

In addition it seems that military activities have been conducted along the cost, ships and submarines were seen inside the Vestfjord. Sonar tests can hurt whales.

The Vestfjord is full of plankton and already now the schools of mackerel are entering the fjord.

Every year since 2007, when we started with our summer trips, we encountered pilot whales, often in super pod meetings inside the Vestfjord end of May and the beginning of June. In addition we saw many migrating humpback and fin whales, and the occasional sperm whales and minke whales inside the Vestfjord. With the mackerel and pilot whales we often saw Atlantic white sided dolphins.

This year we started our field work end of April (30) and there were many beautiful days when the sea was flat calm. We searched often for more than 10 hours in a day…
So far we encountered only a few harbor porpoises that seem to live here residential and  4 different pods of Orca that hunt fish close to the coast. The depth of the Vestfjord however remained silent and empty, not even seabirds could be seen. It is empty. Even the whalers complained and they go now as far north as Spitsbergen to kill whales.

All we can hear in the Vestfjord are these explosions, did they scare the whales away?
Pilot whales have been seen further north in Andfjord and southern edge of Troms in a deep fjord.
It is much quieter there, squid should be abundant in both fjord systems..

What about the seabirds? Where have they gone?
Is climate change influencing the movement of these birds or have they vanished?

A lot of questions need to be answered, while we keep searching Lofoten and the Vestfjord, we are asking for your help to support us and report sightings of whales and dolphins along the coast of Norway, send us pictures or videos, together we can find out where they go.