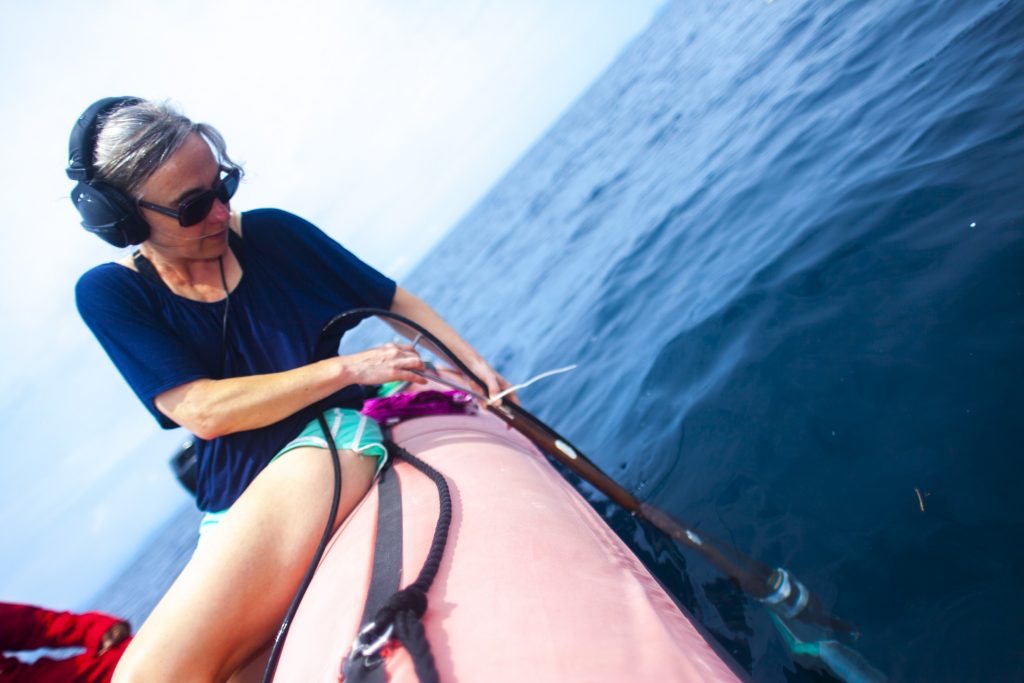 Heike Vester listens for whales using a hydrophone. A metal paddle fitted on one side enables her to identify the direction the sound is coming from.

“I don’t understand why our natural reaction is to chase whales”, says Heike Vester, “if we want to see any land animal in a forest our instinct would be to go slow and not make any noise”.

Born in Germany, Heike has a lifelong love of the ocean and an ever-increasing urge to understand, preserve and protect its largest inhabitants.

In 2005, frustrated by lack of support for research, she embarked on more than a decade of self-funded work which also gave her a PhD. Funding was routed through a non-profit she established, Ocean Sounds, and through partnerships with marine tourism. All the while Heike was building a baseline library of whale communication and the knowledge to interpret this for environmental management.

When it comes to wisdom, wonder and giving, Heike and Ocean Sounds have plenty to offer. They’ve succeeded where many scientists fail. Being independent has given them the rare chance to combine hard science with wonderful and rich communication, all the while hanging on to a deeply-held commitment to conservation.

“In the beginning I needed the tours … it provided a good and stable income. It’s also hugely rewarding when you have smiling faces on board, particularly families” she says “but it’s hard to handle that responsibility at the same time as doing research. Sadly you can’t combine both forever”.

The formative years, spent listening to and documenting the behaviour of Killer Whales and other cetaceans in the Norwegian fjords, was also at a time when tourism activities were escalating. Norwegian tourism reports that in 2014-2015, some operators saw 400% increases in revenue.

Heike could hear what others couldn’t hear (or see) and the effect on the Killer Whales she’d studied for ten years was already becoming apparent.

Pressure on cetacean populations from any activity needs to be managed and the only way to do this, is to report from under the water, yet mostly this vital perspective is ignored. In any case, there are few people in the world able to listen and understand what’s going on.

We never understand what cetaceans are saying but in studying them, there are moments of clarity that give us a whole new way of thinking.

Like the time Heike and her team were approached and ‘studied’ by a Killer Whale … eliciting a complex vocalisation she’s only ever heard since, when the whales were approaching other boats.

“Were they studying us? What were they saying?”, she asks.

Those are things we’d all love to know but even to understand their mood and behaviour is a huge leap in our ability to comprehend and maybe even empathise with their needs. After all, these mammals are not all that different from us. We’ve known for years that dolphins even choose a name for themselves and that can be passed onto other unrelated dolphins and used for individual identification.

“I immediately listen to their behaviour and try to figure out what they are doing. With this instinctive knowledge I can hear when they are feeding, resting or playing, or if there is a disturbance”, says Heike.

In Raja Ampat, Heike was observing Pygmy Killer Whales. There was a video drone on board. Drones offer potential as a new and interesting way to study cetacean behaviour. You can see mother-calf pairs, watch the interactions between individuals and accurately assess numbers. Combined with underwater behavioural sound studies, they could help build new and revealing knowledge for behavioural interpretation and management. 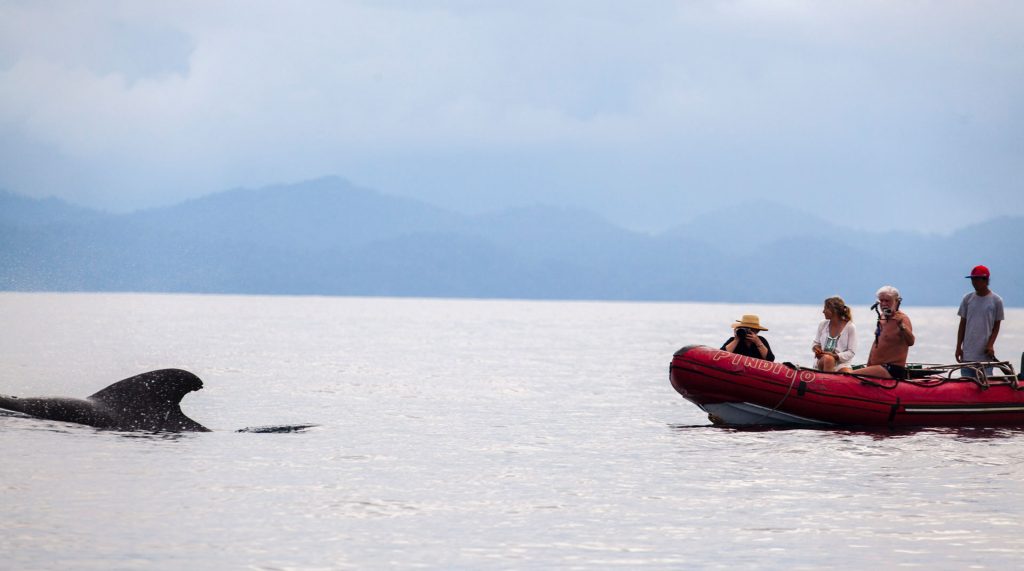 Engines off … guests on Pindito take photos of a calm group of whales and dolphins.

But of course, like vessels and other industrial activity, the high pitch sound of the drones elicits a response, often significantly. This is still understudied and our knowledge on the effect is not really known

“When we had the drone fly over the Pygmy Killer Whales, they completely changed their vocal repertoire, producing excitement calls”, says Heike. None of this was visible from the surface.

Her first visit to Raja Ampat in 2015 was recommended by a friend. “Of course it triggered my explorer instinct” she says. The owner of Papuan Paradise had said they had [Short-finned] Pilot Whales nearby and sometimes even Killer Whales. This was particularly interesting to me since I studied pilot whales and killer whales in Norway and it would be interesting to compare. I’ve spent nights drifting aboard my small research boat, studying the acoustics and social structures of Long-finned Pilot Whales, in the high Arctic. No-one has studied them here”, she says. “Raja Ampat is a unique place that’s virtually undiscovered. The animals are not used to people which is what makes it so special”.

“After meeting three different dolphin species, which blew my mind, we quickly encountered a large group of Pilot Whales. There were so many, it was amazing and they let us come close with the small boat. The vocalisation calls reminded me more of the Killer Whale calls than the pilot whales I’d known from the north”. 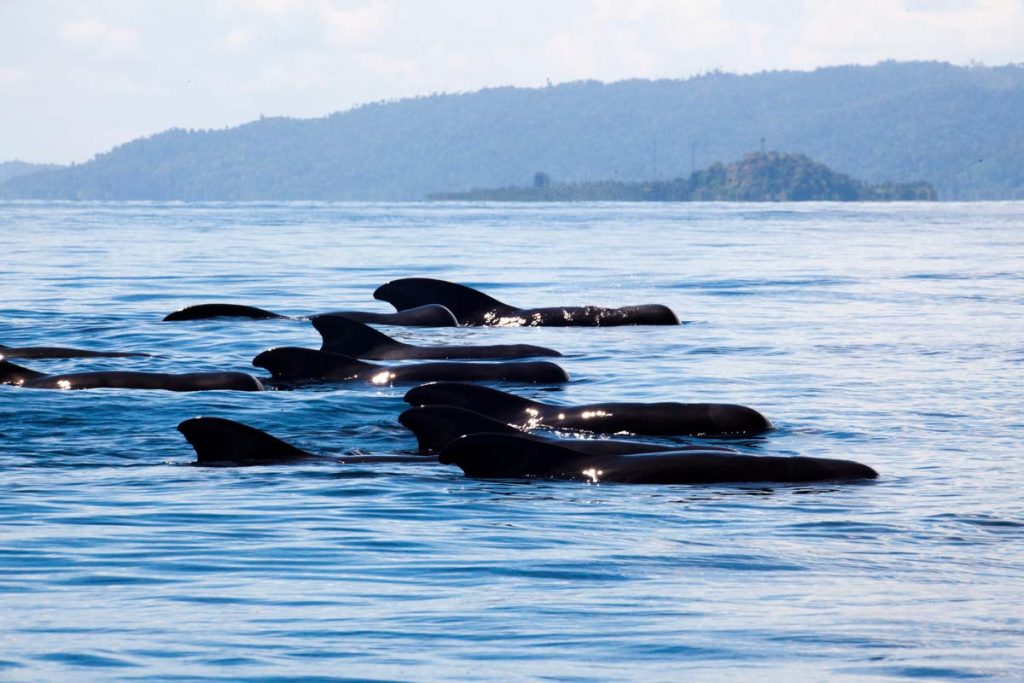 Short-finned Pilot Whales resting with the island of Wayag in the background.

Over the last few years, Heike’s spent much of her own time at resorts, on liveaboards and with support from Dr Ricardo Tapilatu from University of Papua (UNIPA) in Manokwari has gathered knowledge about many of the 17 species of whale and dolphin that live among Raja Ampat’s 1,500 islands. Even in the last two years, there has been a doubling of ferry activity, an increase in liveaboard boats and flights in and out of Sorong. Tourist numbers tripled from 2010-2015 and in 2016 there was even the grounding of a foreign cruise ship that damaged over 10,000 square metres of coral reef, at an estimated remediation cost of up to $16.2M (another ran around on reef at Wayag in 2019).  

A 2001 census identified a total human population of 47,771, growing at an average rate of 0.32% which would make today’s population more than double and could easily be close to 250,000 by 2050. Tourism and Raja Ampat’s pristine nature are among the biggest economic drivers so it’s important the area is prepared for the rapid growth.

This is why Heike is now single-mindedly focused on finding a way to work with UNIPA to help the West Papuans continue to preserve this stunning and still mostly pristine area. She would like to see the establishment of baseline conservation including student education and projects.

“The sole focus now, is to discover ways to finance the work, because this information and knowledge is vital to conservation and environmental management and our knowledge of the world in general”, she says.

There is a lot to do but also a willingness among the Indonesian locals and authorities.

Already the insights are having some effect. Edi Frommenwiler, owner of Pindito and president of the liveaboard association, pioneered live aboard diving in the region 27 years ago. The expertise Heike has been providing, alongside Edi’s own networks with regional government and ports, is creating discussion around the ferry routes, which seem to pass through a particularly rich area for Pilot Whales and Sperm Whales. 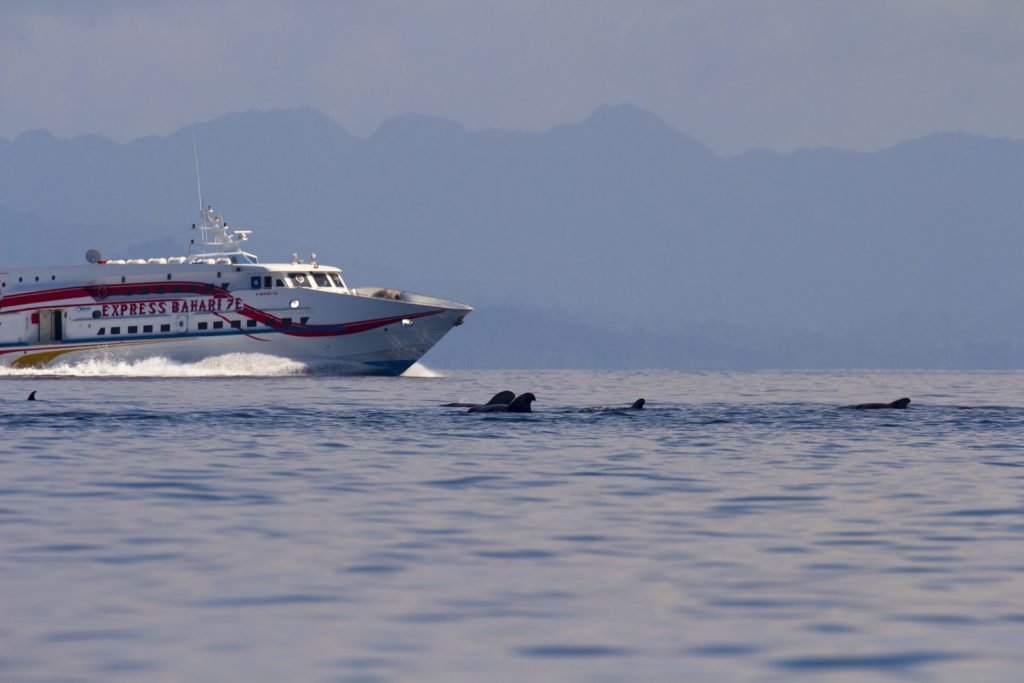 A fast ferry passes extremely close to a pod of Short-finned Pilot Whales.

“It’s about trying to put yourself in the perspective of the animals”, Heike says. “You can’t do this with pictures or film footage and you can’t even do it by watching whales, you have to be able to listen”.