Part of the Norwegian spring-spawning herring (ca 3,5 Million tons) migrates every year closer to the coast of northern Norway to spend the winter. In January-February they travel further south to their spawning grounds along the Norwegian coast. They spend the rest of the year in the open sea and return to northern Norwegian coast the following fall. Killer whales feed on this herring stock and follow them all year round, some pods spend the summer months inside fjords and feed on salmon, local herring, mackerel and marine mammals. The seasonal migration pattern of herring is known to go through major changes. The wintering grounds were in offshore waters in the Norwegian Sea until the late 1960’s. Following a collapse in the herring stock due to over fishing, the wintering grounds moved into the fjord system in northern Norway. Currently the wintering grounds are in Tromsoe, Senja and Andfjorden from the end of October until March. Large amounts of killer whales, humpback whales and fin whales aggregate during this time in those fjords.
Killer whales can be seen in Lofoten from May-September where they typically feed on salmon, herring and mackerel.

Reproduction: One calf every 3-4 years, gestation ca. 16-17 months with an arrested development from July-September. Birth can happen all year, but there is a peak in late fall/early winter. A female gives birth to 4-6 calves over a period of 25 years until ca. 40 yrs old. After reproduction, females live for another 20 or more years, probably to take care of their offspring and group. Newborn killer whales are 1.8–2.2 m long and weigh ca. 180 kg. The mother gives milk to the young for more than 1 year.

Group formation: Killer whales have very strong social bonds. The young of both sexes never leave their mother and live in small family groups together all their lives. This way the males in a group are not the fathers of the young but the brothers, cousins or uncles.
Smallest group consists of 6-15 animals, a matrifocal group, which consist of a mother and her offspring (both gender).

Clan: Matrifocal groups with similar vocal dialects and members that are related to each other.

Community: Several groups that have been observed together at least once. Members of different communities seem not to travel with each other and do not interbreed (e.g. southern and northern resident whales in British Columbia, Canada).

Travelling: Whales moving with all animals in the group facing the same direction, either in a line or in groups.

Feeding: Killer whales have a variety of prey (from fish to marine mammals) and seem to specialize if nutritious prey is available. In Norway, killer whales feed mostly on herring, but they also feed on salmon, mackerel, birds and seals.

However, there are different reported strategies to capture herring:

Socializing (they are always social!): Whales are engaged in variety of physical interactions and aerial behaviors such as breaching, spy hopping, headstands, lob tailing and flipper slaps. Rolling around, chasing each other, and sexual behaviour, distance between individuals within one body length or direct body contact.

Example of prosocial behavior: X-163 (“Stumpy”) a handicapped whale has been taken care of several (at least 5) different matrifocal groups in her 17 yrs of life!

Resting: Whales float motionless at the surface for a few minutes, or swim slowly in tight groups, diving and surfacing in a regular pattern. Resting whales should be left alone.

Communication
Killer Whales depend on vocal communication for social interactions, navigation and food location, and therefore produce a variety of sounds:
Clicks are predominantly used for echolocation
Whistles occur when whales are in close proximity to each other and stereotyped whistles may be important for close range coordination and maintaining interactions
Calls are used for both close and distant range communication. Calls are stereotypical pulsed sounds that are often characterized by two independently modulated frequency components:
A low frequency component (LFC) that has most of its sound energy below 10 kHz, and an upper-frequency component (UFC), which consists of a fundamental frequency ranging from 2 to 12 kHz with sidebands ranging to 100 kHz.
They also produce buzzes and squeaks in the mid frequency range, which often accompany calls. 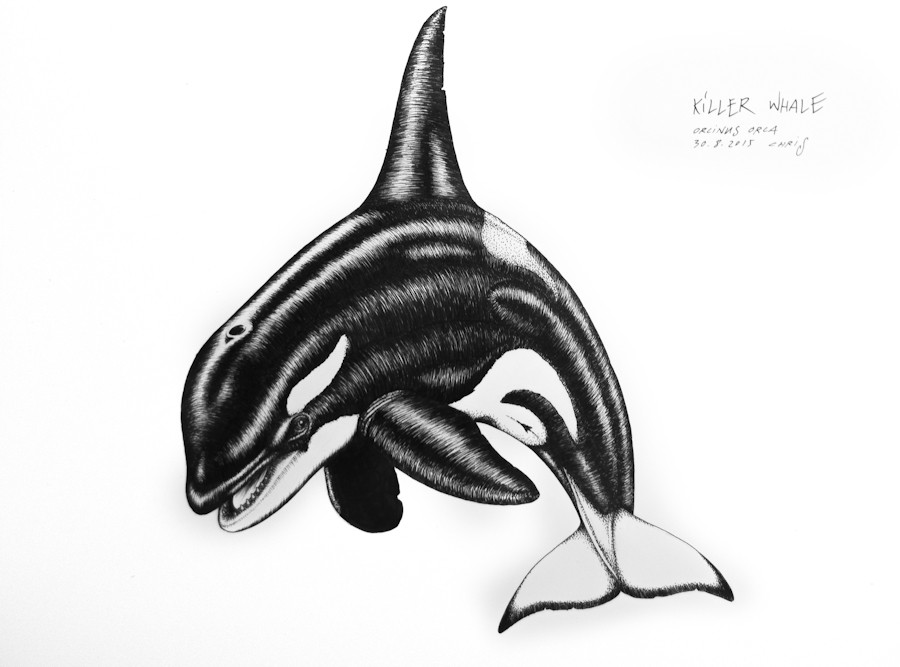