Through Art we try to build a bridge between the often dry and hard to swallow research results and the interest of people. In a creative way we want to introduce a deeper understanding of the complexity of the marine ecosystem and the human impact to trigger responsible behavior. To do this we work directly with artists to join our projects or organize workshops and festivals.

“Ocean Sounds  promotes continuous awareness, understanding, and commitment, to build a bridge between nature and people” 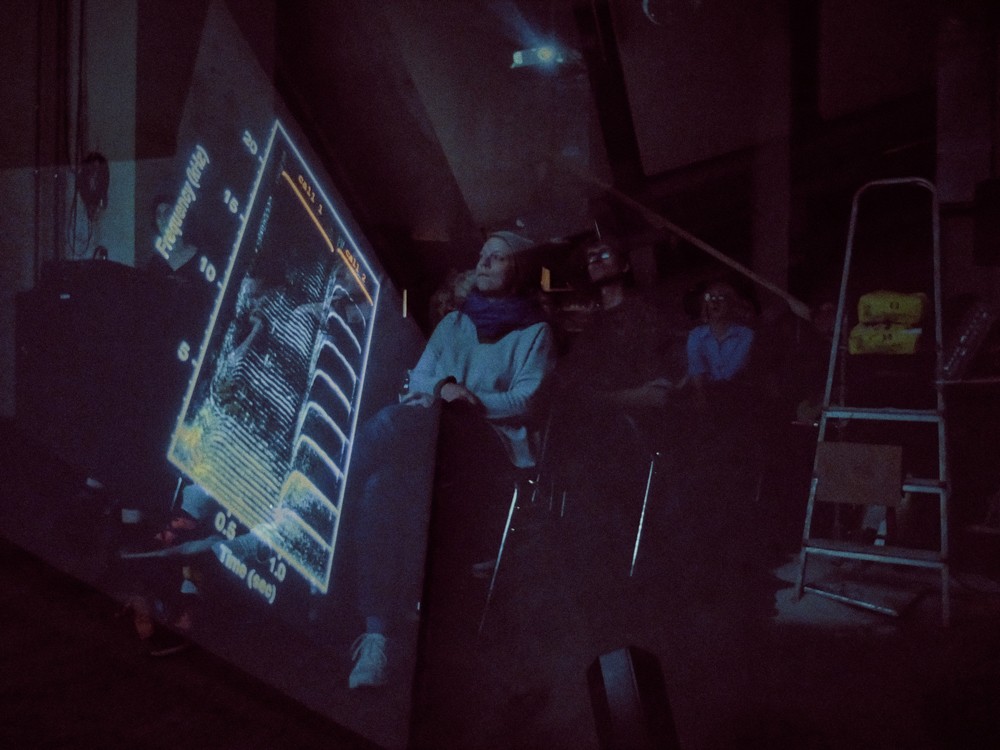 Re.flex.ion: Orca is an audio-visual experience that mimics the acoustic experience Orcas undergo when held in captivity; in contrast with their rich and beautiful communication possibilities in the endless Ocean.

The project aims to bring awareness to a side of captivity, often overlooked and difficult to comprehend without experiencing it.

An immersive journey built on 4DSOUND technology (at Spatial Sound Institute), the audience will be shown how deeply the glass walls of a tank can disturb the health of sound-community-building species.

During the same experience, a representation of the rich sonic bonding and communicating structures of those amazing beings in the wild, will be presented, for the audience to enjoy a taste of what acoustic freedom means for Orcas.

By constructing a sonic space based on the tanks’ proportions (to human scale) and adjusting the acoustic experience of Orcas to the human sensory range, the project makes possible to get a glimpse of their living conditions in captivity.

The audience will feel the big contrast between the freedom and range of communication in their wild natural environment versus life in captivity, subjected to the endless sound distortions created by the reflection over glass and concrete, the high conductivity of water and background noise sources.

Something that can be challenging to conceive in regular human circumstances.

Re.flex.ion : Orca is opening to audience on the 27th of February at the Spatial Sound Institute in Budapest.

Striving to bring underwater acoustic insight and deeper understanding of the circumstances Orcas and other species have to endure in captivity.
Allowing humans to hear what they feel.

DO ANIMALS SPEAK TO EACH OTHER?

WHAT DO THEIR SONGS MEAN?

WILL WE EVER BE ABLE TO UNDERSTAND THEM AND TALK BACK?

Ever since the accidental discovery of whale song in 1967, the idea of complex animal sentience has been gaining strength within the scientific community. A growing number of researchers and academics are exploring the idea that animals enjoy music on a similar level to human beings.

Animal Music is the first anthology to present an overview of the current state of this vital debate. Its authors have spoken to the leading scientists, researchers and musicians in the field to uncover hidden meanings and new perspectives. They visit the world’s largest library of animal sounds, hack into the mysterious sonic world of shrimps, travel back in time to the point where animal and human songs diverged, and decode the latest neuroscientific findings about animal music and communication.

Angélica Castelló sonic blue at klingt.org. 7 Notate, presented 6.10.2013 in Graz at the Musikprotokoll.

Here is a gallery of Chris Studer’s speed drawings of Marine Mammals we encountered in Raja Ampat, he uses pencil and ink to draw these beautiful whales, dolphins and the dugong.

Heike Vester participated and presented her research about whale communication and discuss it with other participants in the habitat: a matter of survival. Whale biology, communication, sounds, music and the aspect of whaling will be discusses.

Project of Gabi Reichert and Heike Vester – we put together a 30 minutes presentation of magnificent photos of whales, underwater creatures, seascapes and northern lights. Here’s a teaser on you tube, so you can get an idea.

Anke studied art therapy and since her graduation she has been working as a freelance artist. Among other things she has produced characters for animated cartoons and worked as Special Effects Maker for a variety of TV Stations (ZDF, KIKA, VIVA, Premiere, NDR, Cité Amerique Cinema Télévision Inc.; Canada) and movie productions.

In 2002 and 2003 she was guest lecturer at the Filmakademie Ludwigsburg and the Kunsthochschule für Medien Köln.

Since 2000 she has been working in the museum  for MD Berlin. She also teaches art in Berlin, with an emphasis on social-cultural aspects.

Since 1992 Anke has had exhibitions of her paintings, sculptures and free object art.

“My special interest regarding the cooperation with Ocean Sounds is finding a new combination of art and environmental protection. Art itself always offers chances to discover new ways of thinking and of interdisciplinary collaboration. Throughout my career as an artist, the nature aspect has become more and more important. Only by treating the environment in a respectful way can we protect our own existence.”

2005 Master of Arts, University of Art and Design, Helsinki, Finland

…many more..sorry for not showing all the projects, if I have forgotten you and you want to be listed with your project, please contact us: info@ocean-sounds